Ben Walsh is a rare kind of musician these days.

Born and raised in the Australian beach-town-slash-hippie-enclave of Byron Bay, his long blond hair and flat-brimmed hat make him easy to identify as a music-maker.

But nothing tells you quite as much about Walsh as his smile: a big, broad, toothy grin that seems to make his whole face open up. He smiles often and he smiles easy, and talking to him, you get the sense that his facial muscles may actually be more comfortable smiling than they are at rest. He’s the kind of person where you feel like he could connect with anyone and form a true friendship within the first 5 minutes of talking to them – and as life so often imitates art, that’s exactly what he seeks to do with his music.

Ben Walsh is a type of musical artist that seems to have gone out of style recently. In a musical climate that’s hyper-focused on individuality, aesthetic innovation, and ‘cool’ factor, his music, his story, and his artistic ambitions are refreshingly simple:

His origin story is equally refreshing. Walsh didn’t rise out of destitution, inherit a musical legacy, or come to music from a need to spread a doctrine: he just loves to play. He always has – and play is exactly what he’s done.

The Busiest Aussie in the Music Business

To date, Ben Walsh has played well over 1,500 shows with his band and as a solo performer. Some have called him the busiest Aussie in the music business. But really, he’s an artifact from another time.

In an era where most artists catch their break from a major blog feature, a cosign from a celebrity, or even going viral on TikTok, Walsh has taken the old-fashioned route. He’s made his name by playing, plain and simple. The story of how he got his first gig sounds like something you’d hear back in the ‘70s:

“When I was 18 I bought myself a guitar and drove down to Sydney,” he recalls. “I walked into a hotel further south, out in the country asking for a job as a cleaner, and when the manager saw my hair she knew I was from Byron, guessed that I was a musician, and she just asked me if I wanted to start playing gigs at the bar.”

Instead of getting the dishwashing job he expected, this encounter landed Walsh full-time work as a cover musician at a bar. He started with 6 shows a week, but after a few weeks of playing, the establishment bumped him up to 16 shows a week.

From the start, Walsh had a knack for crowds. But these shows let him see the power that music can have in a room.

“You know that feeling when everyone just gets excited and starts singing along? I love that,” he explains. “I started seeing how ecstatic people got when you play the right song, so it became kind of a game of trying to navigate ‘ok who’s in the audience, what kind of songs should I play,’ you know?” 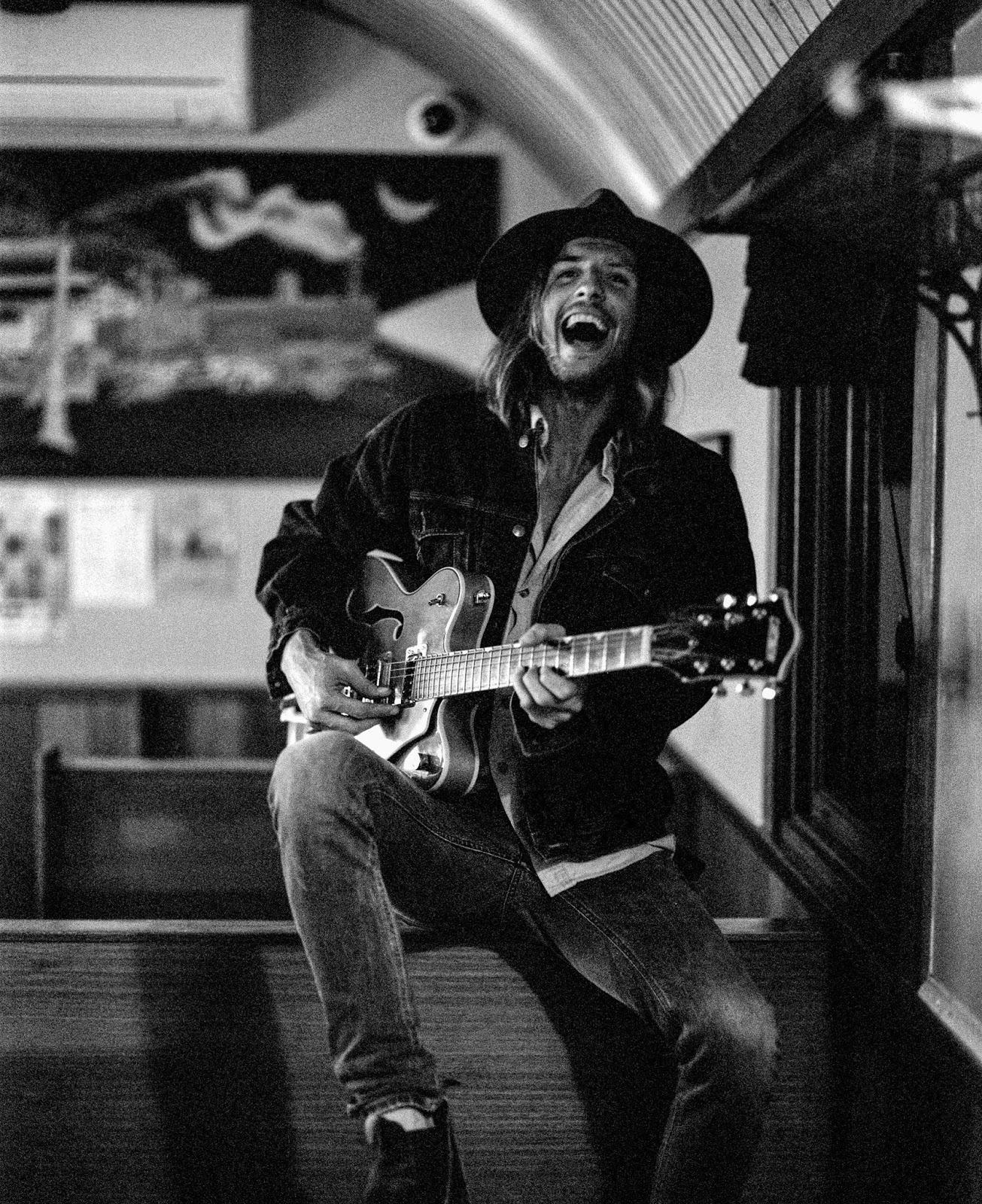 From Bar Band to Byron Bigwig

At first, Walsh played his shows solo. But after drummer Reuben Carr heard him cover a song by mutual inspiration John Fruscante, he added drums to his outfit. His audiences started to grow. Within a few months Walsh and his band were in high demand, playing lively shows to bar crowds just every night of the week.

After a few months of this, Walsh started to feel a complex that’s familiar among cover musicians:

“When you feel like you’re hot sh**, you’re sort of resentful of the fact that you’re playing covers, even though you’re getting paid to do it,” he recounts. “We started to get this complex, but then I thought – what the hell? That’s such a stupid attitude, why don’t you just be grateful you’re playing music for a living?”

As busy as he was playing covers, though, he still felt the urge to create original music. It was difficult at first: he hadn’t grown up writing songs, so he wasn’t exactly sure where to start. He’d learned to put on a dazzling show and delight a crowd with his performance, but writing original songs was an entirely new skill. 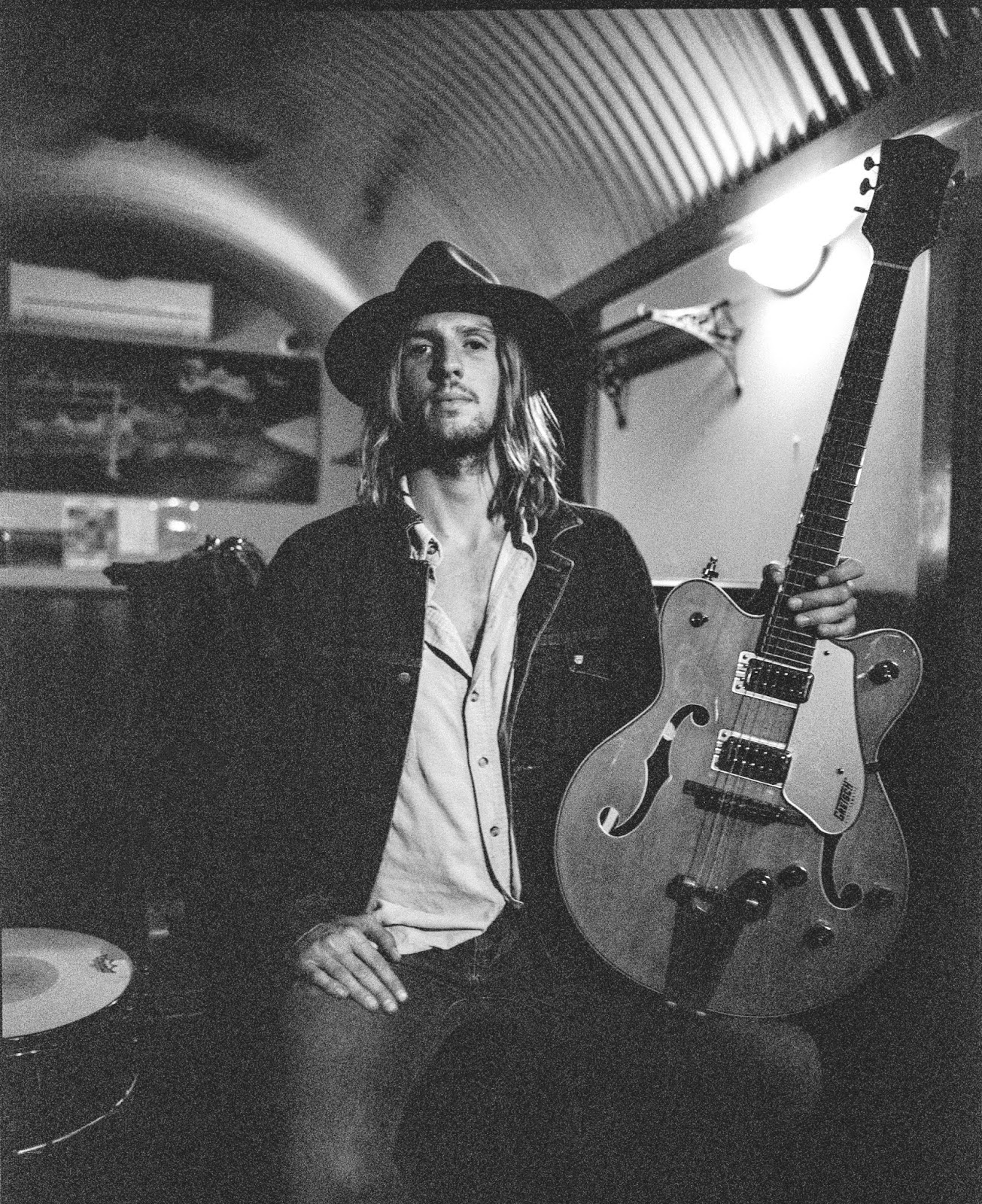 Walsh’s first few attempts at recording original music weren’t bad, but he feels they fell flat artistically. He chalks it up to being in the wrong headspace:
“At that point I was still coming to writing from a place of where I thought I should be, rather than what the listener would want to hear,” he explains.

His first single release didn’t quite feel right. But it triggered a perspective shift that set him on a new path:

“I started to ask myself, how can I take the energy I feel when I’m playing in a room and put it into an original project?” And even more,” he asks, “how can I make sure everyone else who works on it feels just as involved and fulfilled as I do?”

This line of thinking came to define his ethos as an artist. Walsh is something of an anti-egoist in his music: his real goal isn’t really to express himself or even tell a story. It’s to make music that makes people feel good – and to make everyone on the project feel good while working on it.

“Once I flipped that switch, mentally I mean, or spiritually maybe, that’s when I started writing stuff I really, really liked,” he says. “And from there I just started to collaborate more and more with people.”

This burst of collaboration led him to meet James Nagel, an award-winning producer based out of San Francisco.

And that’s when it all started to change.

“James got in touch and said, look, let’s see what you’ve got,” Walsh recalls. “So I went out to my garage, poured a glass of red wine, and just pressed record and started playing for half an hour.”

He played freely, improvising different melodies and ideas over chords and blues riffs. Eventually, he landed on something he liked, so he hummed and mumbled a version of a song into a mic and cut together the roughest of all demos.

Walsh and James continued to collaborate on the track, slowly shaping the melody, lyrics, and instrumentation over the coming weeks. That song turned into “She Gives Me Love,” an uplifting blues-rock track with sunshine running through its veins; something like a cross between Jason Mraz and Elvis.

For Walsh, the process of creating “She Gives Me Love” felt like a validation of his artistic intentions – especially when it came time to shoot the recently-released music video. He filmed it at The Rails, a unique bar built inside a railroad car that’s established itself as a staple of the Byron music scene, and a place that he’d played many times before.

“They [the Railroad Hotel] were so on board from the first moment, and so many talented, artistic, passionate, beautiful people came together to be a part of the shoot,” he explains. Originally, Walsh had planned for two dancers, but 12 showed up on the day of the shoot. And whereas his friend had planned to shoot the video, another friend showed up with a full set of professional film gear.

“After the shoot I sat back and just said to the assistant director, ‘Jess, this is everything I envisioned when I decided I wanted to make music that brought people together,’” he recalls. “I didn’t plan for it to go that way – it just happened.”

Walsh is currently working with Nagel to produce a few more singles as a launching pad to his full original project. But through it all, he’s never stopped with the thing that got him here: playing shows.

Walsh’s debut single is due out on all platforms later this year, with the video soon to follow. But to really understand what he’s about, the best thing to do is go see him.

“I like to be busy playing,” he says. “That’s all I really want, anyways – I’m not trying to be famous.”

After a beat, he continues:

“I just want to be able to release music that feels great and keep playing shows.”

And if the past is any indication, there’s no doubt that he will.